History of the Grape: Merlot 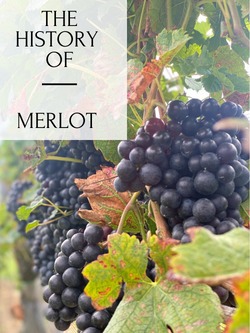 One of the world's most popular red wines—Merlot is loved for its versatility! Here on the North Fork of Long Island it is one of the most prolific and widely planted varieties. A consistent ripener, Merlot makes beautiful blends as well as single varietal wines.

Although currently one of the most popular wines in the world, Merlot was originally considered a secondary grape by winemakers, believed to be best suited for blending rather than as a “stand alone” varietal. While there are now a plethora of delicious single varietal Merlot’s to choose from on the East End as well as around the globe, Merlot continues to be a favorite amongst winemakers when it comes to blending.

A Brief History of the Grape

Merlot was first mentioned in 1784, in Bordeaux. Back then it was called Merlau or Merle. It is said that Merlot was named after the “blackbirds” that loved to eat the ripe grapes, these birds were a similar blue, black color to the ripe grapes.

Still the most planted grape in Bordeaux France, Merlot grows alongside the other classic Bordeaux red varietals including Cabernet Sauvignon, Cabernet Franc, Malbec and Petit Verdot. In Italy, Merlot was originally called Bordo and is widely used as a blending grape in Super Tuscan wines.

Merlot reached its peak popularity in the US in the 1990’s, then experienced a drop in popularity after the movie Sideways came out in which Paul Giammatti's character poked fun at the wine, saying Merlot is bland and the market is oversaturated with the varietal. In the two decades since, Merlot has made a comeback and is currently the second most popular grape varietal in the United States. 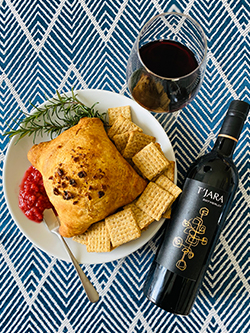 A Closer Look at our Merlot

Classic old-world style, our 2017 T'Jara Merlot is the last wine made under the T'Jara Vineyards label and will be succeeded by the first Suhru Wines Merlot which will be released in 2023. A medium to full bodied wine with beautiful blueberry, maraschino cherry and tea leaf aromas on the nose mingled with a hint of mint. On the palate you'll see notes of red raspberry and cranberry with fine tannins on the mid palate through the finish.

Like all reds, Merlot is best served at room temperature (60 – 65 degrees F). Medium to full-bodied reds in general are recommended to be served at a low 60 degrees Fahrenheit to best showcase the ripe fruit notes and soft tannins. Merlot pairs well with a variety of foods including white and dark meats from chicken, turkey and pork as well as pasta, burgers and pizza.

Make sure to open your favorite bottle of Merlot on International Merlot Day this November 7th, and toast this versatile grape as you savor every sip!

Learn More About our Merlot