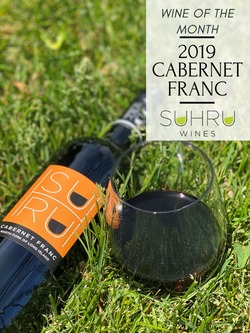 Our first Cabernet Franc under the Suhru label, we are very excited to share this much anticipated new wine! This classic expression of a cool climate Cabernet Franc has a rich garnet hue, with bright fruit and notes of black currant, raspberry, and a hint of anise on the nose. This bold red has a nice mid palate with notes of mocha and cocoa, fine lingering tannins and a light smokiness on the finish with the slightest hint of vanilla.

In 2019 we saw a very nice growing season and were very happy with the fruit intensity and ripe tannin structure of this wine. Cabernet Franc grows beautifully on the North Fork of Long Island and the 2019 harvest was no exception.

In the last several years we have seen this varietal continue to receive critical acclaim and rightly so. Russell, our winemaker, has seen dramatic changes to the perception of Cabernet Franc during his winemaking career. He made his first stand alone varietal Cabernet Franc at Pellegrini Vineyards in 1994 from vines that were originally planted to be used for blending rather than for a stand alone varietal wine. Since then Cabernet Franc has grown to be a staple of Long Island. Russell (and the whole Suhru family) are very happy to share Suhru’s first vintage of Cabernet Franc (and his 26th vintage of Cab Franc as a Long Island winemaker).

A Closer Look at Cabernet Franc 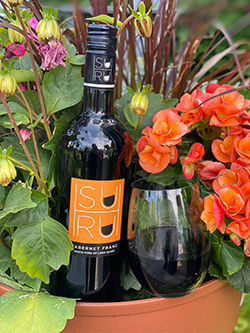 This varietal Cabernet Franc is blended with 12% Teroldego and 6% Merlot to enhance the fruit and body of the wine. The three varieties were each fermented in open top tanks and punched down during their time on skins. The goal being to extract color and tannin without the astringency, before pressing to retain the vibrant fruit notes. The wine is then aged for 14 months in a combination of Hungarian and French oak.

Learn More About our Cabernet Franc