History of the Grape: Teroldego

The latest addition to the Suhru Wines portfolio, we are very excited to share the release of our Teroldego! First released to our Wine Club in early September, this delicious new wine is now available at the Tasting House!

A perfect wine for the cooler Fall months, this unique red wine has warm baking spices on the nose with hints of anise, cinnamon, and red currant. Notes of red raspberry and wild briary fruit compliment the fine tannins and bright acidity on the finish making is a perfect wine to enjoy with a meal!

A Brief History of the Grape

Teroldego is a lesser known Northern Italian varietal (best known as the nephew of an old French variety that was the parent of Syrah) and is a rarity on the North Fork and in the US. To our knowledge there is only one vineyard on the East End with this grape variety planted and we are very excited to have gotten our hands on it!

Fun Fact: 97% of the world's Terolego’s production comes from Italy

Teroldego is found across the globe in California, Australia, New York and Brazil however the majority of the Teroldego vines planted are in Italy. An Italian red grape variety primarily found in the northeast region of Trentino-Alto Adige, it is believed that the name “Teroldego” came from the traditional method of cultivation in which the vines are trained on a system of “tirelle” or wire harnesses.

A cool-climate varietal, Teroldego is a hardy grape varietal that is known for being vigorous. It is best suited to permeable, well drained soils, making it a perfect grape to grow on Long Island where our soil is comprised of sandy loam soil with great drainage.

A Note from Winemaker Russell Hearn 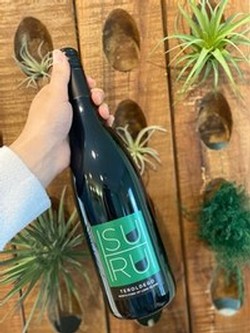 "Over the last 12 years Suhru has been committed to producing a small selection of wines, specifically selected to showcase the varieties that grow best in our region. Making a wine that you like is important, but it is more important to select a variety that grows well in the region otherwise as a winemaker I am setting myself up for failure, as you need great grapes to make a great wine.

As my wine preferences have evolved over the decades I’ve found myself leaning towards elegant, over powerful red wines as they compliment rather than overwhelm the meal. This led me to further exploration of Italian wines, specifically wines from the Northern Alto Adige Region, where I happened upon Teroldego.

This variety is known for fruit forward, expressive wines with elegant tannin structure. Teroldgeo does not benefit from extended barrel aging, so can be bottled and released earlier than most of our other red wines and is an early ripener which is a huge asset in our region where hurricanes have been known to decimate later harvesting varieties. For all these reasons and more, when we discovered Teroldego planted on the North Fork we jumped on it and are very excited to share our latest wine. I hope you enjoy it as much as I do!” 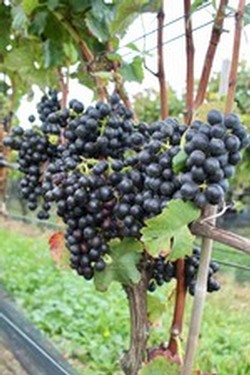 A Closer Look at Suhru Teroldego

Grown in Southold, NY, Teroldego is known for being an early ripening (on the North Fork, Teroldego is usually picked around the second week of October, before Merlot) and early release wine. A light/medium bodied wine and a distant cousin if Syrah, Teroldego is designed to be enjoyed now and is not a wine that benefits from bottle aging.

After bring picked in early October, our Teroldego is fermented in open top tanks and then spends 9 months aging in French oak.