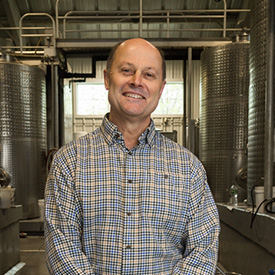 As part of the Long Island Wine Country #SundaySips campaign, we will be hosting Q&As with members of our team on Sunday afternoons on Instagram.

Join us at 3pm on Sunday, April 26th at 3pm on Insagram Stories for a Q&A with Russell Hearn, Winemaker at Suhru Wines!

A little about Russell...

Russell has made extensive contributions to the New York wine industry over the past three decades with his wines garnering extensive critical acclaim and industry wide respect. His innovative winemaking style has influenced the quality of many wineries in our region, none more so than Pellegrini Vineyards and more recently Lieb Cellars and Bridge Lane.

Australian born, he grew up around wine as his mother was in the business. Russell started his career in Western Australia and has taken his training with him throughout his journey with experience gained working in New Zealand, France, and regions across the USA. Russell founded Premium Wine Group a custom crush facility in 2000, encouraging small, fine quality wine producers like Suhru Wines to flourish.

As the winemaker of Suhru Wines, Russell brings his knowledge, experience, and relationships with quality New York State growers. He greatly enjoys the time spent working with Susan developing Suhru Wines and is excited for their daughters to join the team!