History of the Grape: Cabernet Franc 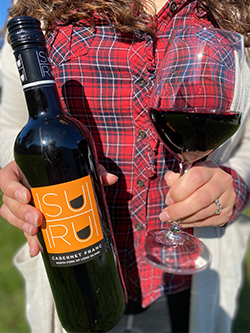 Records of Cabernet Franc go back to the end of the 18th century in Bordeaux, although it was planted in Loire long before that time. Cabernet Franc first earned its popularity in the Loire Valley in the 1700’s, at the time it was known by its original name, Bouchet. Today Cabernet Franc is planted around the globe in America, Italy, Spain, Australia, New Zealand, Argentina, Chile, Hungary, Canada, Bulgaria, Croatia, and most recently China.

Fun Fact: Across the world, Cabernet Franc is one of the twenty most widely planted grape varieties.

Why its Well Suited to Long Island

One of the most widely planted red grape varietals on Long Island, Cabernet Franc grows best in stone, chalk soils and sandy terroir. The North Fork of Long Island is comprised of sandy loam soils with excellent internal drainage, modest fertility, and moderate water-holding capacity which control and limit the impact of the periodic summer rains, controlling vine growth and promoting grape ripening in the fall.

On the North Fork of Long Island our terroir is derived from our glacial soils, cool maritime climate and native flora. The soils have excellent drainage and our cool climate and proximity to the ocean means that our long summers are tempered by cooling breezes off the Long Island Sound and Atlantic Ocean that prevent excessive summer heat. The surrounding water also gives off warmth extending summer into a mellow fall, allowing ample time for the fruit to ripen on the vine. Most similar in climate to Bordeaux, France the East End has embraced "old-world" vinifera grape varieties.

Two particular favorites are a glass of Cabernet Franc with roasted or smoked lamb and in our opinion, no Thanksgiving dinner is complete without a bottle (or two) on the table!

Learn More About our Cabernet Franc