The Ageability of Suhru Reds 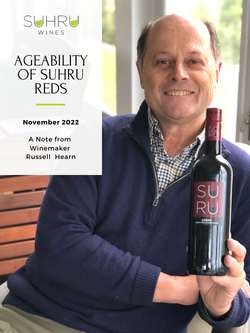 One of the things I love most about winemaking is the cyclical nature of the profession and its ties to nature. It is very rewarding each year watching the progression of the vine throughout the growing season moving from bud break in the Spring, to fruit set and cluster development over the Summer months, ripening and harvest in the Fall and then watching the vines go dormant for the Winter months before it all starts up again.

While Harvest and the vineyard tend to get most of the attention in the wine world, as a winemaker I also get to see what goes on behind the scenes in the tank, barrel and bottle. Much like the cyclical cycle of the growing season, the winery runs the same with the hustle and bustle of Harvest in the Fall with fermentation, racking, filtrations followed by barrel aging for our reds and the beginning of bottling of whites and rosés in the Winter Months moving into red blending trials and red bottling in the Spring and Summer before it all starts up again.

While the vineyard and winery work is often the most visible, there is a lot happening in the bottle as it continues to bottle age in the months, years, and decades after it is initially bottled. Which brings us to our Library wines. We are excited to be sharing a selection of Library Reds.

A Closer Look at the Long Island Wine Region

The Long Island Wine Region, specifically the North Fork is what is referred to as a Cool Climate growing region, meaning that we get "cool" not "cold" temperatures in the Winter months. While it may not always feel that way to us, and we do get inarguably very cold days, those extreme cold temperatures are moderated by our proximity to the ocean. Being surrounded by water on three sides, the water acts as a blanket in the cooler months insulating us from the extreme cold temperatures that you see in Northern wine regions such as the Finger Lakes. This allows us to grow vitis vinifera grape varietals and for the wines made from those grapes to retain higher acidity and moderate alcohols typically in the 13-13.5% range.

The Ageability of Suhru Reds

As a winemaker, my style preference of not trying to extract much of the astringent tannin from the seeds by shorter soak times during fermentation, creates softer red wines. That coupled with the fact that Long Island reds retain higher acidity and moderate alcohol levels, means that wines from our region can comfortably age in the bottle for 10-15 years. As we approach the end of 2022 this means that wines from the 2013 vintages, undisputedly one of the best growing years on Long Island, are quickly approaching their 10 year age mark.

The 2013 vintage was a near perfect growing season on the North Fork of Long Island, regarded as one of our region's best vintages to date. This was due to a hot, dry summer and absolutely zero rainfall during the entire Harvest, meaning every varietal was able to reach optimal growth and development unimpeded. We saw this trend of high quality vintages continue into 2014 and 2015 leading to excellent wine in the bottle.

We hope you will join us this weekend for our Library Reds Tasting, available by reservation Thursday, November 17th - Monday, November 21st. Can't make the event but still interested in exploring these delicious wines? Click Here.